Navigating the winter wonderland of the Queens Zoo 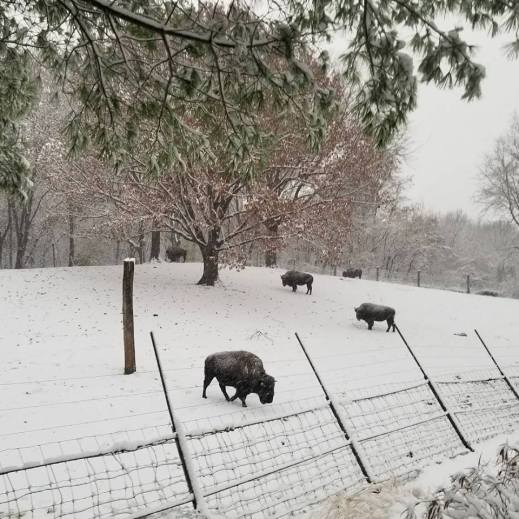 When the weather is bad, our family goes to the zoo. Our logic is this: Many of the indoor spaces will be overcrowded and the zoo will be sparsely populated. When you’ve lived in the city long enough, avoiding crowds is more important than avoiding pneumonia.

So this past weekend’s snowfall made our planned trip to Westchester unwise, but made a short drive to the zoo a piece of cake. The parking lot on 111th Street that is a chaotic mess and a graveyard of public parking dreams during the summer had plenty of spaces. I pulled into a space right near the ramp we would need for our youngest daughter’s stroller.

One of the goals for this weekend was to help give my wife time alone at home to prepare our home for Christmas. I was on my own for several hours with three children all under four years of age, and found myself pushing a stroller through a moderate snowfall in Flushing Meadows-Corona Park on our way to the Queens Zoo. There was a small group of teenagers having a snowball fight when we got there, and one cyclist pedaled past us and shot me a strange look is if to be amazed he came across someone crazier than he was out in the snow.

While the children were equipped with proper hats and coats, one pair of mittens was inevitably quickly lost and our youngest got wet and hungry very fast. The snowfall was not bad. It was only one or two inches in the city and the snow did not stick to the streets very well. A few runs of a plow with some sand and salt made things OK. But cold kids make for cranky kids and herding three youngsters through the wet and cold is a chore with an additional distraction (snow) that is also a physical obstacle. The front wheels of the stroller would stop cutting through and spin in a sideways fashion, gathering reels of snow around themselves like some perverse cotton candy machine. Otherwise they would stop moving completely and I’d be essentially be operating the world’s most ineffective snow plow.

The Queens Zoo is a perfect place to bring kids because it’s relatively small compared with its larger and more famous counterpart The Bronx Zoo. It can be done thoroughly in a morning or afternoon. Arriving at the zoo after a snowfall revealed a hushed atmosphere covered in a gorgeous layer of fresh white powder that proved perfect for making snowballs. It was one of those days when you look around and can’t believe you are in the middle of one of the largest cities in the world. A few times you would hear the rush of the highway or the sounds of people playing in the park outside the zoo’s fence, but it was desolate and beautiful and well worth the soggy feat and cold hands.

The zoo posts the times of the sea lion feeding and I had to hustle to get us there in time. When we got to the sea lions, there was one other couple there. This couple were the only other non-zoo employees we saw during our entire stay. They huddled under an umbrella while two of my daughters climbed a snow-covered rock and declared it their mountain and the other sat on the wet ground to have a better vantage point to scream her undefined infant rage at the world. That’s right, normal couple at the zoo: my children are many times tougher than you and earned the grudging respect of the animal kingdom.

We had an up-close view of the sea lion feeding up close but cut it short because we were all hungry. The Sea Lion Café offered a warm, dry refuge and sold hot coco and coffee among its souvenirs and snacks. We took our time eating before we bundled up again, only go head to a restroom where it was necessary to take coats off again. We easily killed 20 minutes in the restroom, making sure everyone either used the toilet or had a diaper change. Then back out into the snow.

The girls enjoyed looking at the animals but probably enjoyed handling the snow and stomping on puddles more. Even though my wife had packed more than adequate snacks for us, “snow burgers” became a much sought-after treat, and there was no keeping my young charges from indulging in them, only trying to police the color and source of the snow (only white snow, not from the ground).

We marveled at how close the sea lions and the bison came to us, and followed with a mad dash to get to a restroom again. By the time we finished there and thought about returning to glimpse more animals, security guards looked to be closing the zoo for the day. It was just as well, my girls were showing signs of fatigue and by the time I got them back to our van and buckled in, they slept soundly for two hours while I went on a coffee-fueled road trip from Corona to Flushing and Bayside.

I returned home with three tired children to a home in much better order. Mission accomplished.