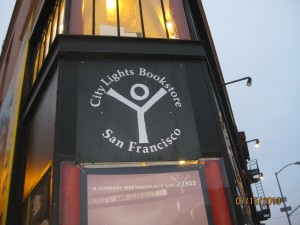 I have not visited San Francisco without visiting City Lights Books; I’d feel guilty not visiting if I’m there. It’s a great rite of passage for any lover of the written word.

So it was with usual enthusiasm that I entered again on my most recent trip to California and the great city of sourdough.

City Lights is well known for its fiction and poetry. It is of historic note as a center of the Beat writers and it is owned by the still-living beat writer and poet Lawrence Ferlinghetti (his book of poems A Coney Island of the Mind is one of the best ever by the beat generation).

Looking at the political books near the register, there was no attempt at balance. There was the latest from an aging academic and Soviet apologist, a diatribe from a racism hustler gloating over the demographic changes in the U.S., and the usual suspects. I bear no grudge against my many leftist friends and there are many left-wing causes I agree with, but a good bookstore will try to provide some balance, and you couldn’t balance this bookshelf if you put Mein Kampf on it. A bookstore has a right to stock whatever it wants on its shelves and I’m sure most of City Light’s customers gladly drink what passes for the “progressive” Kool-Aid today. But would it hurt to stock some opposing viewpoints? Politically speaking, our literary world has become an echo chamber of self-hating marshmallows.

The upstairs room is dedicated to poetry and to the Beat writers. A chair by one of the bookshelves had a sign on it that read ‘Sit Down and Read a Book.’ The larger rocking chair next to it had ‘Poet’s Chair’ painted on it. I decided to sit there, since I do indeed write poetry. I picked up a book of poetry from a nearby table that looked interesting. It was a large but not thick book that had an interesting cover with what looked like a bloody doll or puppet on it. I don’t remember the poet’s name. I sat down and read some poetry and realized the stuff I write is better. I turned the book over and read the brief blurb about the author: someone with a predictable pedigree of the literary establishment and not the poetry power to match it.

But a good literary scene happens when people go off on their own and take inspiration from the real world around them. Flocking to a bookstore because Allen Ginsberg once took a shit there doesn’t promote good writing.

I was no longer in the magical place of wanderlust young poets. I was in a retail store that helped suck the life out of literature by cashing in on long-dead celebrities and following the same institutional claptrap that would have made Jack Kerouac puke in his backpack.

There is a fine line between inspiration and commoditized hero worship. My latest trip to City Lights made me believe the venerated bookstore had crossed the line. But then again, it’s a business. It knows we’ll keep buying books there. I’m guilty as charged. I bought a large R. Crumb coffee table book and Knut Hamsun’s Growth of the Soil.

City Lights Books inspired me once again, but differently than in years past. I left with a determination that the current guardians of our culture’s literary estate need to have their throats cut. Let the call go out in America today for a ninja army of a new vanguard who will make poetry and literature real to people again, and not the province of the sad sacks of coffee shops and admissions offices. Great writers don’t eat tofu. Great writers eat sausage, spinach and pussy.

American once found its writers among its strongmen, housewives, sailors and hardscrabble journalists. It will once again.

New York in the summer is for oppressive heat and simmering anger, for being tempted with the sights of more female flesh while blanketed with heat and the sweaty intrusions of more people.

City life is a trial of patience and suffering in the summer. Concrete and blacktop absorb and reflect the heat, exhaust fumes are trapped by tall buildings, and everything in the city is hotter than everywhere else. Cramped onto subways and buses, we bristle at the sweaty touch of others, suffering further in one another’s vulgar heat.

Summer tests everyone’s patience. The heat and humidity magnify the unending slights and annoyances that are the fuel of city angst. The unavoidable heat and its sweaty unpleasantness works to erode our patience and our souls boil over with anger and white-hot rage almost daily.

The sad realization of summer hit me just yesterday while I stood waiting for the 7 train in Flushing. The 7 train is populated mostly by Asians with sharp elbows who scramble for seats that they’ll only sit in for about 25 minutes at most and are less comfortable than standing. I prefer to stand so I can read the paper and not fight for a seat. But like other subway lines, the 7 train is a strange beast that operates on its own whims and curses its riders with frequent malfunctions. I was jolted to the realization of summer while standing and waiting for the subway at Main Street, which is underground – most of the 7 line is above ground. “Signal problems” caused a delay in subway service, and there was little to do but stand motionless and suffer as the platform became more crowded and sweat soaked through your clothes.

Summer in the city has its fun moments. It’s sometimes nice to stay in the city while everyone else is away, especially Labor Day weekend to end the summer season. New York is forever populated with young women and the degeneration of our society has dictated that popular fashion becomes more and more revealing with each summer season.

But at some point, you must leave New York City for at least 48 consecutive hours every summer in order to preserve some shred of sanity. Being baked in a concrete, glass and body odor oven for three and a half months will make even the strongest person go mad.

I’m going to Connecticut to light off explosives with a few good friends and then to California where I will try to trace the steps of Henry Miller and light bonfires in tribute to John Steinbeck and the ghosts of Portuguese whalers. But I shall return soon to our sweat-soaked city to grab it by the throat once again.