The Ice Bucket Challenge: An Internet Trend to Be Proud Of 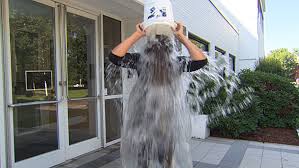 There’s finally an Internet challenge you can be proud of and you should ignore the naysayers and do it already. That’s the ice bucket challenge.

The number of Internet “challenges” that have proliferated over the last several years are legion. These challenges normally involve a potentially dangerous stunt such as the “fire challenge,” the “cinnamon challenge” and the like.

More recently there is the “ice bucket challenge,” which involves people pouring buckets of ice water over their heads. On the surface it’s another load of stupid fun, and it could easily be another trend without reason, though pouring a bucket of ice water over one’s head in August is not necessarily silly or absurd. And it doesn’t have to be dangerous, though some people have made it so.

What makes the ice bucket challenge stand apart from your run-of-the-mill daredevil or disgusting Internet challenge is that it is being done to raise money to fight ALS.

ALS (Amyotrophic lateral sclerosis) is better known as Lou Gehrig’s disease is a horrible disease that attacks the nervous system and leaves its victims unable to move or care for themselves before finally killing them.

While it’s certainly a good cause, I might just as easily be dismissive of the trend had I not known someone who was taken from us way too soon. I and several of my friends performed the ice bucket challenge in memory of Betsy Quilliam, a friend’s mother who died from the disease in 2008. “Mrs. Q,” as she was known to most of us, was like a second mother to a lot of us and her home was the central meeting place for my largest circle of high school friends. She was enormously compassionate and generous. There is no accounting for the magnitude of loss her passing represents and no way to express the enormity of the injustice of her death. She was a standard of pure selfless good in an increasingly selfish and introverted world.

So it was with pride that I accepted the ice bucket challenge. I got the challenge on a Friday evening and I was not going to be able to manage to video myself pouring a bucket of ice water over my head within the stated 24 hour deadline.

But that was no matter. Because the real point of this challenge is to DONATE MONEY TO FIND A CURE FOR ALS. All these chilled buckets will only be a waste of water if people don’t remember to do that. So far they have to tune of more than $70 million as of Aug. 24.

So while I didn’t get around to pouring a bucket of ice water over my head on video until Sunday, I got up early enough on Saturday morning to go online and make a donation. Initially that may have been all that is required. The donation was initially supposed to be done in lieu of pouring the bucket of icy water over your head.

But people want to see the bucket of water, and doing it allows you to challenge three people to do the same, so that’s three potential donations you can generate with a little bit of cold water.

I made my plans to do the ice bucket challenge. Lacking a large enough bucket, I cleaned out a large waste container we use to put recyclables and set aside seven trays of ice cubes in a bowl. My wife and I put our baby girls in their stroller and went outside our apartment building with our ice and our water receptacle along with my smart phone and a towel.

I guess I can take the cold pretty well because while the bucket of ice water was cold and a brief shock to the system, I didn’t flinch too much. I had planned out what I was going to say so I made sure to deliver my challenge. A few people commented that maybe the water wasn’t cold enough, but it was.

So there are three more people who will be donating to find a cure for ALS. Getting even a tiny bit closer to ending this disease is worth all the stupid Internet fads in the world.