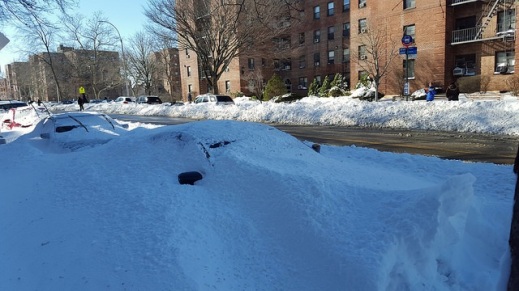 New York City is the city that never sleeps and never shuts down. It take events of epic proportions to knock us off of our game, and even then nothing is ever completely deserted. This is, after all, where the world takes its pulse and sets the pace for Western Civilization, and we take that task seriously.

New York is digging itself out from a winter storm that hit us on Jan. 23. It was as if we got all our winter weather in the span of about 24 hours. When winter started this past December, we had spring-like weather. Seventy degrees on Christmas? That’s bullshit. Old Man Winter got his revenge in a big way and buried much of the East Coast in a blanket of snow. For New York City, it was the second-largest snowstorm on record in the city’s history with more than two feet of snowfall recorded in Central Park.

Preparations started in earnest with people watching the weather reports and making jokes about stocking up on bread and milk as they made sure to stock up on bread and milk. Anyone who had plans for the weekend canceled them if they could, but it was heartening to see from social media that some things didn’t stop.

It was also heartening to see worthy displays of “New York Values” in dealing with the severe weather. The term “New York Values” has recently become an issue the 2016 presidential campaign, with Texas Senator Ted Cruz using the phrase as a smear against Donald Trump. I’m as cynical and jaded as any other long-time New York resident, but there was enough cooperation and good will on display during the storm to shame any friendly Texan. In the parking lot of our apartment building, one of our neighbors helped shovel out part of our truck. We returned the favor by helping shovel out the car parked on the other side of us, with a shovel lent to us by another neighbor.

My social media feed was littered with stories of neighbors helping neighbors with shovel and snow blower alike. A photo of a team of good Samaritans pushing a stranded ambulance out of a snowbank in Manhattan was enough to warm the heart even as your fingers and toes became numb.

City living makes people into blazing assholes, but it also makes people into cooperative souls out of point-blank necessity. When you are surrounded my millions of people, living life isn’t possible without some measure of cooperation. It may take a while to understand the ebb and flow of city life and plug yourself into it in a way that both preserves your sanity and allows you the boldness and hustle to get things done. New York rewards a certain level of aggression, but even the strongest of the strong cannot get by without a certain degree of give and take, there’s just too massive a crush of humanity to fight everyone to the death over every trivial slight.

Now as we look to get our work week underway, we all expect some of this city camaraderie to sublime like idle snow as we navigate an already overtaxed and incompetently run transit system in an attempt to get to work on time. Wish us luck.