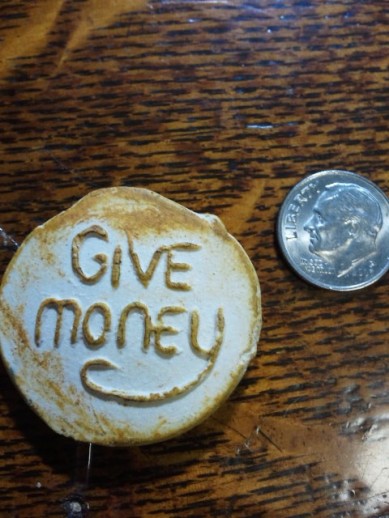 A little more than two years ago I found a strange object in downtown Manhattan and I have been puzzled by it and would like to learn its origins. I am reopening the case as I remain curious as to its origins.

I spotted it as I walked past Delmonico’s restaurant. I noticed what appeared to be an odd coin sitting on the edge of the landing.

The coin is roughly the size of a quarter and appears to be plaster. It resembles a quarter that has been plastered over. On one side reads “Give Money,” and the other side reads, “To Bums.” Underneath that is the cryptic “bw 12.”  Should I take that to mean that this was created by an artist with the initials B.W. in 2012?

Is this perhaps a coin created by a mysterious artist? Has some anonymous artists been handing out coins with the insistence that recipients leave one in a public place? Have I found such a coin?

When first mentioning this find a few years ago, a few people posted comments that they found these coins elsewhere in downtown Manhattan. None of the others who found them had any clue where they came from.

If you have any clue as to the origins of this coin, please let me know. Until someone tells me otherwise, I’m going to assume it’s a priceless Banksy work that will be worth millions of dollars when I am ready to sell it to a fancy art collector

But whether it’s the work of a well-known artists or not, it’s anonymous public art that is looking to both entertain and provoke thought. Someone took the effort to make something solely for the purpose of provoking a change in the general public as well as the free enjoyment of the work itself.

Would it be a violation of the aesthetic to reveal the artist’s name if I learned it? If the artist contacts me first and lets me know who they are, I would honor their request to remain anonymous.

And while I very much appreciate finding this piece of art, I have not heeded the strange coin’s advice. Giving money to bums is a bad idea. Most of them will spend the money on drugs and alcohol and handing over your money will only encourage them to stay bums. There are plenty of legitimate homeless charities you can give to if you want to help the homeless and destitute. They should know that our streets and subways are a not place of bounty and willing donors.

I promise to keep the coin as an interesting work of art, and will only sell it if it is given a ridiculously high valuation or I become poor and desperate to sell anything of value. Until then, the coin stays with me and the bums will not get it.