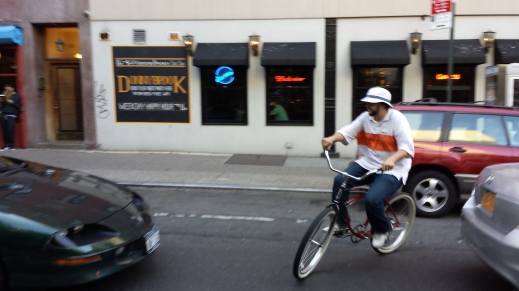 There’s been a lot of discussion in the news of recent political violence in this country. Scuffles have broken out at political rallies between protesters and supporters of rival candidates. Protests have gotten ugly. The overwhelming majority of Americans deplore violence of all kinds.

We’ll have no shortage of political ugliness in New York. Some of it has already gotten under way in earnest. But our Gotham is full of human abominations that people of all political affiliations can agree ought to be subjected to swift and brutal physical punishment on sight. Here is a catalog of the top five worthy subjects:

People who stand on the left side of the escalator. Sometimes people don’t realize that they have committed this infraction and there are people who come to New York from parts of the world where escalators are rare (watching Haitians attempt to board an escalator at JFK airport was an eye-opening experience), and they are usually sensible enough to move aside when you say “excuse me.” But some people think that an escalator is an amusement park ride, and they ought to have some common sense and manners beaten into them frequently and without mercy.

People who read their smartphone, kindle or book while walking. You can see these zombies a mile away and each one of them thinks they are the rare exception that can pull it off and not be that plodding imbecile impeding the progress of our precious Gotham. They are wrong. Trample them underfoot. They are not fit to live here.

People who use public transit seats for their luggage. Unless your purse or backpack paid $2.75 to ride this crowded bus or subway, let it sit on the floor or on your lap, or else you will find a host of volunteers willing to cram it up your ass.

Cyclists who ride on sidewalks, run red lights and ride on the wrong side the road. It is never these rancid, entitled brats who are dragged to their deserved deaths by garbage trucks or city buses, but it should be. If I’d go to jail for doing it with a car, don’t you dare try it with a bicycle. What’s most galling is when they yell at pedestrians to get out of their way as they are preparing to run a red light.

People who listen to music or watch videos in public spaces without earphones. Some people are not content speaking on their cell phones in theaters, they want to bring the theater experience with them and everyone within earshot. Simply inform these people that their earphones must be broken since you can hear their sports event/Chinese soap opera/rap mix tape, etc. If they don’t get to the hint, see to it that their devices and jaw is broken as well.

Can we all get along? Yes, we can all agree that some people need to learn some manners. New Yorkers can unite around these common enemies.