Fireworks and the American life

Last Wednesday thousands gathered in Fort Totten Park in Bayside, Queens for a fireworks display. The event had all the makings of potential disaster by modern metrics. Thousands of diverse people crammed into a limited area and jockeying for space to get a good view. A little league soccer team was wrapping up practice as people took their places in the expanse of green field between portable toilets and a row of food trucks. Bounce castles entertained children before the fireworks started and people took what they thought were the best positions to view the show as they waited for the sky to get dark enough.

The fireworks started promptly and a roaring whoop went up from the crowd as fireworks lit up the sky. New Yorkers cheered enthusiastically for this celebration of our War of Independence. When it was over, the crowd made its way out of Fort Totten without incident, or at least any major ones.

From parts of Fort Totten you can see the glitter of the Manhattan skyline and be inspired by the nighttime majesty of the Throgs Neck Bridge lit up. It is a marvel how New York holds itself together while the country seemingly tears itself apart. Gotham is as rife with division as everywhere else: New York City gave us both Donald Trump and Alexandria Ocasio-Cortez.

The greatness of New York serves as a microcosm of America. We see all the same issues in New York first, and the city, rightly or wrongly, serves as a template for how the rest of the country can navigate its problems.

The Fourth of July brings us down to Earth, reminds us of how American we are. It is popular to look upon outward signs of patriotism as right-wing or quaint, but if you believe America is for everyone and that patriotism is expansive and great, then join the celebration. The freedom we have was purchased in a bloody war, several actually.

The land we are on we do not claim by divine right. Every inch of America was fought over. We waged war on France, Great Britain (twice), Mexico (twice), Spain and countless Native American nations to get the current borders of the United States. July 4th celebrates the birth of our nation, a hard-fought war for Independence that was in effect our first civil war. When the war started it was not a foregone conclusion that we would win. The patriots who signed their names to the Declaration of Independence knew that the document would serve as their death warrant if the war didn’t go their way.

The Battle of Brooklyn was one of the bloodiest fights in the history of the American Revolution, and the war would have ended had Washington not been able to retreat to Manhattan. The British held New York for most of the war, but the city has signs of the American Revolution everywhere. The first woman who took up arms for America, Margaret Corbin, fought at the Battle of Fort Washington in Manhattan.

Some are fatalistic and see America as it is headed now as intrinsically doomed. There is no cultural coherence to sustain us through these times, they say, and new communities and nations will rise out of what is now a crumbling empire. But New Yorkers have bridged these divides in the crucibles of ambition and creativity. We are strong when we demand truth and strength, and turn to leaders not afraid to speak honestly and make the right enemies. We can do that in America as a whole if we are willing.

Let the American Revolution be our call to action today. 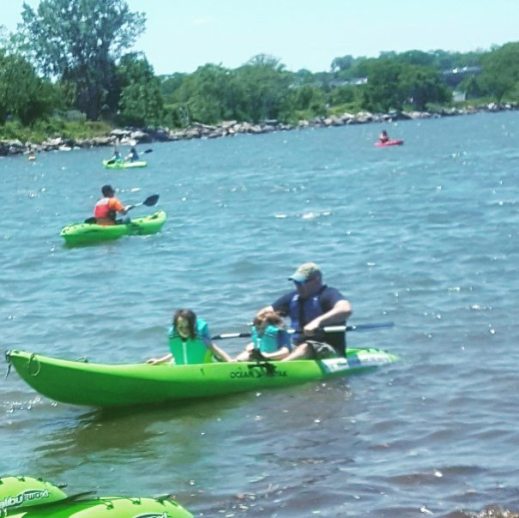 One of the benefits of living in a non-trendy part of New York City is that you can benefit from a lot of cultural enrichment without crowds of five-borough tourists that flock to the city’s more fashionable haunts. Everything in the Flushing-Whitestone area where I live is a long train ride plus a bus ride away from where the ‘in’ crowd frequents in Brooklyn and Western Queens.

We recently took a journey to Little Bay Park, a slice of land between the Cross Island Expressway and Flushing Bay. It is directly adjacent to Fort Totten, an old U.S. Army base that is now a public park but still houses military and other agencies such as the police and fire departments and the Coast Guard Auxiliary.

The larger family fun day that had been scheduled for Fort Totten was canceled, as recent rain made their fields too muddy for any public events. Instead a smaller event was taking place on a small strip of land right along a walking and bike path that lead from Fort Totten into Little Bay Park. The main attraction being free kayaking for families.

Here is where a semi-suburban city Dad gets to experience some of the monotony associated with being a hipster festivalgoer. We stood in line in the hot sun for quite a while waiting for our turn to have a free kayaking experience. The start was delayed because the kayak operators found they had only a small sliver of beach to work with and it was covered in garbage. Vest-wearing volunteers using rakes and shovels filled six large garbage bags with garbage while would-be boaters and other park visitors gawked at them while also enjoying the sights of the bay.

This was going to be a killer father-daughter experience that would instill a love of nature and the seafaring life upon my two older girls. My wife had no interest in boating and was happy to wait on land with the baby and the stroller. I have good upper body strength and have paddled canoes before through swamps and on lakes. How difficult could kayaking be?

After a long wait we were finally given life vests and lead to the kayaks. The launch area was filled with empty kayaks and there wasn’t really enough room to both load and unload boaters at the same time. Once we managed to get around the empty kayaks and other boaters, we found that our vessel was already taking on water. That’s normal, the people told us. Water just gets in there. So I sat down in a puddle of water on the seat after having to step into water in my sneakers and socks (you had to keep your shoes on so I thought they had a system where we wouldn’t get our feet wet).

With the girls loaded into the boat, we were ready to launch, but it was a lot harder to do than I thought. I couldn’t hold the big oar steady in front of me without hitting one of my girls in the head, and it felt like we were sinking since I weigh so much more. I managed to paddle us out a little ways, but the wind began blowing us back pretty steadily, and I narrowly avoided getting blown into a rocky jetty.

Now I had something else in common with the hipster festivalgoers of Brooklyn: a general ineptitude and overall disappointment in the performance of manly duties. I’m not stupid and I’m strong enough to lift and move heavy things. But a plastic kayak with a payload of two 40-pound little girls had me stymied. After just a few minutes, not happy with sitting in water and feeling insecure in the shaky boat, they asked me to paddle back ashore. I happily obliged.

An essential part of living life and embracing adventure is the knowledge that not every adventure is going to go so well. This was one of those adventures that didn’t go so well. Not to fear though, the promise of a picnic and some delicious food was enough to motivate our girls to move on to the next thing. Soon we were enjoying a delicious lunch in the shade of a small tree in Little Bay Park.

After our meal we returned to the event area and acquiesced to the demands of ice cream at one of the city’s ubiquitous Mr. Softee trucks, we visited more of the event.

The highlight of the day was singing along to pirate and seafaring songs with Scuttlebutt Stu, who regaled everyone with great sing-a-long songs about pirates and sailors. His songs came with a lot of interesting history. I learned that the term “son of a gun” came from times when sailors would be allowed conjugal visits with their wives aboard their ships, with private beds being made between ships’ cannons. I knew that the term “groggy” came from grog, a mixture of rum and water, but did not know it got its name from Admiral Edward Vernon, known as “Old Grog” from his wearing of grogram jackets. Each song that Scuttlebutt Stu sang came with an interesting lesson that increased our fascination with the sea and demonstrated just how much of our modern culture has been shaped by the ages of the explorers and privateers.

Scuttlebutt Stu was dressed like a pirate with a heavy vest, long-sleeve shirt and tri-corner hat in 86-degree heat and no shade. He was a trooper like I’ve never seen. The breeze and briny smell of the bay lent a great aura of authenticity to the experience of learning about the pirate life through song. Stu is part of a duo called The Royal Yard that performs frequently in the New York area both together and individually.

I’m not a great singer but it was great fun to sing along, the wife and kids sang along as well and soon others joined in. It was perilously close to the kids’ nap time, and it’s always somewhat of a race to get home so they can sleep a little longer and get some more rest. But we stayed around for a few more songs and then headed home.

We made it back in time to let the kids nap in their own beds, another day’s adventure behind them. We were all the richer for it.