Being a jerk with two phones 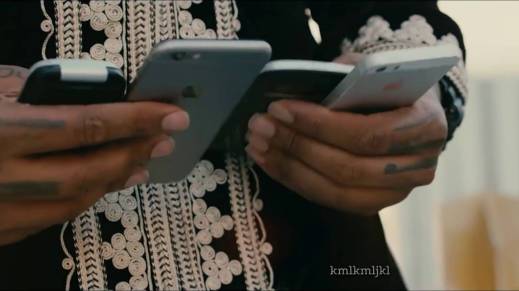 I am now a jerk with two phones. My general disposition has not changed and I don’t behave differently towards people now that this has happened. I remain polite and respectful to everyone unless they prove themselves unworthy of respect.

But by definition if you have two phones you are a jerk. I never wanted to be a jerk with two phones. I make it a point not to become too attached to one phone, but now I am attached to two.

I began a new job about a month and a half ago and along with the job came an additional phone. This wasn’t a choice. At my old job we were able to check our work emails on our personal phones and the company paid us a stipend for that. But I joined a larger organization that has its own rules and doesn’t mind spending the money to give a lot of its employees their own phones.

Now I can walk around with one phone on each hip like the Sherriff of Douche Town. I can be on three phone calls at once if I sit at my desk at work and dial into separate calls on each phone.

I try to keep my work phone in my bag with my work laptop (which I also take home with me each night), but sometimes I know I’m going to have to look at it more than I want to. But at odd times the work life creeps into the home life and I have had to get a lot of work done on the weekends, which I often consider a sign of personal surrender.

I recently found myself text my wife with one phone, telling her that I was on the phone with my boss on my other phone so I wouldn’t be able to speak with her. While holding two phones in one hand and speaking on one of them, I walked around my neighborhood looking like a crazy person. Seriously, 10 years ago if you saw an adult walking down the street holding two phones in one hand and a jumble of charging wires and car keys in the other, you would have thought that person was insane; well today I was that insane person.

I am glad I am not an unemployed Luddite and don’t want to disconnect from the world. But there’s got to be a way to be a more balanced person and live life to the fullest while still putting food on the table for your family. I will hopefully find this balance before dropping dead of a heart attack while talking on my work phone.

The blinding allure of technology 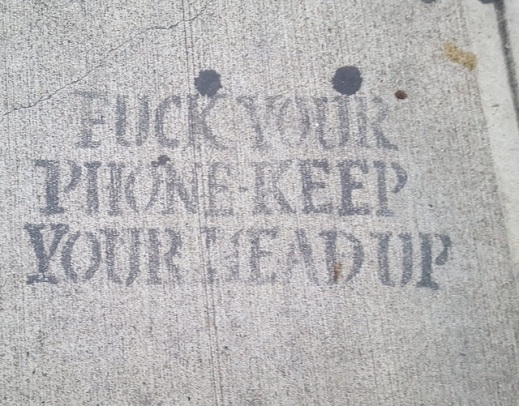 This past weekend my wife and I got new smart phones. It’s a ritual we are accustomed to doing every two years, and it was hastened by our one-year-old daughter putting my wife’s phone in a cup of coffee.

We took our brood on a shopping adventure to our local wireless store and purchased the latest Android phone. We picked out our phones and accessories and I remained at the store while my wife took our three daughters to visit stores with less expensive breakables.

By the time the store closed an hour and a half later, my phone was not done transferring so I had to keep my old phone close to it as I searched for the rest of my family. We hadn’t arranged to meet at any specific location but I’d simply start walking around the Bay Terrace Shopping Center and hope to see them. I couldn’t text my wife to find out where they were, I had her phone stuffed in a shopping bag along with extra charging cables and other accessories.

While I may have once taken pride in being somewhat of a Luddite, there is no stopping the increasing use of technology. You can’t put the genie back in the bottle. I was the last person among my circles of friends to get a cell phone and one of the last to get a smart phone. I’m not as technologically connected as my younger peers at work. I have come to embrace technology even if I use it more sparingly than others. It’s a matter not only of etiquette (sending a text message if you are going to be late) but increasingly of safety (knowing who can see our children’s photos on social media).

I refuse to be one of the zombies I see slowing down foot traffic in the city, and those slothful grown children are not the product of technology but rather bad character and upbringing. If mobile phone technology had never been invented, no doubt these self-centered techno rubes would be finding other ways to make our lives more difficult.

The people who are abusing smart phones and gaming technology are inheritors of the slack-jawed mindlessness of those who abused television and less advanced video games years ago.

Technology does not cause any moral rot any more than it creates virtue. Throughout the centuries there have been two schools of thought that have reacted to technology that have been totally wrong: those who think that it will bring about the downfall of mankind and those that thought that it would bring a new era of virtue and help create a more equitable society.

As I searched for my family, I came across a man who was standing idle on the sidewalk. He looked at me as I looked across the parking lot and struck up a conversation, asking me if I was bored and commenting that this part of Queens is boring and Manhattan is where it’s at. I made polite conversation, but noted we were not far from interesting nightlife closer to Northern Boulevard and that the shopping center had a movie theater.

The man was odd and too eager to speak with strangers. He was not threatening at all, just awkward and sad. I did not ask him if he had a smart phone with him but if he did I did not see it. Such a device would have helped him find something to do. Queens does not have the same social scene as Manhattan, but that’s no matter. No one in the five boroughs has any reason to be bored.

And someone by themselves at a shopping center on a Saturday night striking up a conversation with me has social issues holding them back more than geographical challenges.

But no matter, a few minutes later I found my family at a frozen yogurt shop, and we enjoyed some brain-freezing treats before heading back home. My wife and I had to feed our kids and get them to bed before spending time with our phones getting them set up properly. We’re almost done.