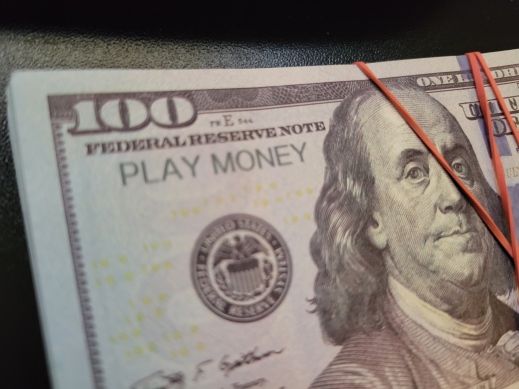 The lure of being lucky and striking it rich is a powerful opiate in America. From our very foundation as a place of refuge for the unluckiest of Europe, the self-made millionaire has a place of reverence in American lore. Very few attain that status, but millions have exhausted that dream and put themselves in an early grave working to attain it.

The chase for American riches has taken many forms, from the California Gold Rush to endless swindles, and the latest destination is cryptocurrency. Cryptocurrency is digital currency that can be exchanged for other currencies. Bitcoin is the most famous but there are more of them than I care to count.

There is absolutely a place in the world for a digital currency, but many of the current crop of these currencies defy what a currency needs to be: a stable unit of value measurement. If Bitcoin can lose 22% of its value in the matter of days, or drop precipitously in the course of a morning based on the whims of Chinese regulators, it is missing an essential element of being a usable currency.

And there will be a time when crypto currencies are real and have real value and usefulness. It’s important to note that in some totalitarian countries like China, the use of crypto currencies have been a force for good, enabling people to do business without oppressive government interference. But we are in such early days of the cryptocurrency world that the safe and regular use of cryptocurrencies is still years away.

There are cryptocurrencies pegged to regular currencies—such as Tether, which tracks the U.S. dollar—known as Stablecoins. In the future, some kind of Stablecoin may be used globally that would enable secure, anonymous use with the kind of stability that a currency needs.

But that kind of legitimate use is a long way away from the rampant speculation that is captivating the imaginations of get-rich-quick investors. What’s worse, the same kind of faux populism that gave us the GameStop rush of a year ago has been de rigueur in the crypto world.

And this rampant, pure speculative increase in value is based on hopeful dreams and nothing more. Even stocks that are widely overvalued are supported by an understandable business model. With crypto, you can lose your shirt in the course of an afternoon and have no one to blame but yourself. Most world currencies – U.S. Dollars, French or Swiss Francs, Euros, British Pounds—are backed by powerful governments that have a vested interest in maintaining a stable currency. You can argue that U.S. Dollars are propped up by the Federal Reserve Bank or even an Illuminati conspiracy, but they are doing a better job than they keyboard commandos, Russian bots and other shady characters running the crypto world.

What is so shameful about the current state of crypto is that people are being drawn in who otherwise would invest in something more constructive. Hard-working people who find it hard to get ahead and save for their kids’ college tuition are plowing money into the latest online toy money when they could be investing in something real. At this point I’d be happier with these people stuffing money into mattresses rather than putting it into the latest cryptocurrency that’s being talked up by social media shysters.

But like major speculative rushes of the past, the crypto world will experience a “shakeout,” where those that don’t have real values drop quickly and investors lose money. It could be quick and violent. There will be stories of people losing their life savings because they were told they could double their money in months.

Crypto currency speculation is going to be one of those things future generations read about and ask why people of our generation didn’t do something about this global boondoggle. The reckoning is coming; please don’t get burned.

Technology continues to advance and change our world, human nature does not change. Technological advancement does not mean moral advancement. While we can summon a wealth of information in less than a second, the human race isn’t applying this knowledge in a way that makes our world any more just and fair.

And so it is with our taxi cabs. While technology enables us to hail cabs, it has not improved the ethical standards of drivers or riders. I have seen this illustrated across our city in several ways, but most vividly this past week.

It was after 6 p.m. and since I was out of work late I wanted to waste no time in getting home. I was in downtown Manhattan and the traffic looked painfully slow. I positioned myself near a street corner so a car could make a quick exit off of a bumper-to-bumper Broadway. I requested a ride from Lyft.

I got a call from the first Lyft driver.

“Hi this is your driver from Lyft, can I confirm where you are?”

“Yes. I am at Broadway and Worth Street. I’m a bit before Worth Street so you can make a left and get out of this terrible traffic.”

“And can I confirm where you are going?”

A few seconds after our call ended. I saw that the driver had canceled my ride and the mobile app was searching for a new driver for me.

I also realized how I had made a terrible mistake. One of the features that is supposed to make ride hailing services better than hailing cabs on the street is that the application does not tell the driver where you are going until they confirm on their device that you are in their vehicle. This stops them from cherry picking rides the way yellow cab drivers do, asking passengers where they are going before they get in the cab, so they can avoid taking fares to destinations they don’t like.

Ride hailing drivers subvert this system in two ways: they will pull over and confirm on their device that you are in the cab when you are not, and then canceling the ride before you get to them. And, like they did with me, they call you and ask where you are going and then cancel the ride if they don’t like what you tell them.

The second Lyft driver called a few minutes later, doing the same thing. I didn’t tell them, but it didn’t help anyway.

“Can you confirm where you are going?”

“I’m on Broadway and Worth. I’ll see you soon. Are you nearby?”

“Yes. I am at Broadway and White Street. I will be there soon. … Can you confirm where you are going?”

“That’s a great question. I’ll confirm when I see you. And I’ll see you soon,” I said with the friendliest confidence I could muster.

My phone soon indicated that this driver had canceled as well, and now I had to start the request for a driver all over again. And guess what? The price for a ride was now about $20 more than when I was first looking for a ride. This made me livid but I was too tired to get worked up about it, and besides, I would have been mistaken for a crazy person, shouting at my smartphone in the middle of Broadway as downtown traffic slowly crawled by.

The third driver arrived and completed the trip. With all the shady driver shenanigans, I probably saved no time in getting home and would have been better off taking a subway or express bus.

A friend who is a yellow cab driver broke down the one issue he may have with taking fares to the outer boroughs: if it’s towards the end of his shift, he faces late fees if he brings his cab back to the garage late. That’s the only time he picks and chooses his fares, and he recommends reporting those drivers that won’t take customers where they want to go. My friend is exceptionally good at what he does, and even lets passengers know when they can get somewhere faster using public transit. I had one Lyft driver tell me that in Maryland recently, and I much appreciated it.

In a few short years, the drivers at ride-share services like Uber and Lyft have perfected many of the repugnant practices that sent riders away from yellow cabs to begin with. Ride-hailing service drivers are known to cancel rides in time to take advantage of surge pricing times. No-show cab drivers can still saddle would-be riders with $5 cancelation charges which are difficult (though not impossible) to fight through the companies’ Web sites. And yellow cab drivers are left in the lurch, many of them deeply in debt with loans for medallions that they may never be able to pay back, a situation regulators ignored.

At the same time, ride sharing services are in greater demand, since our public transit system is so rotten to the core the subways lines can be delayed even by an overflowing toilet.

As with yellow cabs, remain vigilant when you are taking one of the raid hailing services. What looks like a minor inconvenience could be another scam.