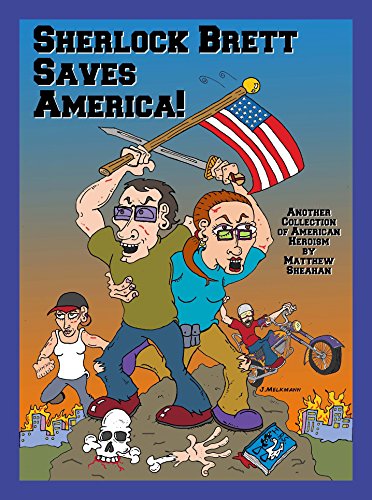 More than 20 years ago, when I was still in college, I started writing short stories for my stepbrothers. My stepbrothers Brett and Lyle wanted to be hero detectives, and so the first short story, “Sherlock Brett and the Case of the Missing Clowny” featured them searching for our younger sister’s favorite stuffed toy (spoiler alert: I had the stuffed toy; I was such a poor college student that I was trying to barter it for groceries).

These stories were silly fun for young kids, though I snuck some adult jokes in there in case my father or stepmother happened to read one of them. I began making a habit of writing these stories for Brett and Lyle’s birthdays and for Christmas.

The adventures of Sherlock Brett, his trusted brother and sidekick Watson Lyle, and our sister Georgia, have evolved over the years. My younger brothers and sisters are all adults now. I still send stories, but they have much more adult subject matter and explicit sex and violence.

Four years ago, I got a call that Brett had taken ill in Miami—he had moved there to work for Univision—and that the illness might soon prove fatal. My father and stepmother flew down there immediately. Brett was in a coma and his prognosis was grim, but he pulled through. He’s still recovering from the effects of being sick and in a coma, and it has been a steady but slow road to recovery for him.

Brett has stayed sharp and I’ve continued writing stories for him. He hasn’t let his long recovery process put a stop to his life and he married his wife Samantha, who now has a bigger role in the Sherlock Brett stories.

While I am glad that these stories have a small and appreciative audience among family, I thought that they could help form a vital part of my literary canon and be published for the general public. I put a few short stories online for sale through Amazon, but you had to have an Amazon Kindle or have the (free) Kindle app on your smart phone.

For Christmas last year, I wanted to have a physical book to send Brett as a gift. I began collecting some of what I thought were the better and more recent Sherlock Brett stories and compiling them in a book. I pulled them together and began editing them for publication. This took longer than I expected and I learned I know little to nothing about book design.

But slowly things came together. I got the very excellent Justin Melkmann to do the cover art and help with editing from my wife Emily got the book in top shape.

Last year, Brett was the first person I called after our youngest daughter was born to give him the news and tell him his new niece’s name. I told him I was sorry he had to share a birthday with another family member, but the doctors had determined the time was right for our offspring to be from her mother’s womb untimely ripped.

So if you’d like to read the adventures of a detective who not only ran for president but also handed Islamic terrorists their worse defeat ever, took the world’ largest bowel movement while helping fight a band of White Castle bandits, and helped fight an unfair bathroom law in North Carolina, then buy this book.

I plan to continue writing the Sherlock Brett as well as stories about my other brothers and sister until they ask me to stop or until I die. These are fun to write and I have license to bring some much-needed levity and satire to our world.