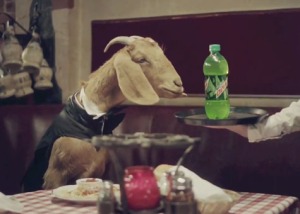 The brief clips that I’ve been able to watch of this “racist” commercial actually look funny. A crazy goat guzzles Mountain Dew and beats up a waitress. The waitress, cut, bruised, on crutches and wearing a neck brace, is viewing a lineup at a police station that features the brown goat and four black men. Even though her assailant is obvious in the lineup, she is too traumatized by the Dew-crazed goat to identify her attacker.

The men in the lineup are all members of the rap group Odd Future, and the video was directed by Odd Future member Tyler the Creator. Tyler the Creator is not that good a rapper—and he’s disrespected Yonkers to boot (watch this parody of his work by the much-better rapper Hopsin)—but he and other members of the group have a comedy show called Loiter Squad that has actually had some funny moments.

What seems to be lost on the legion of intelligentsia who’ve condemned the commercial as racist is that IT FEATURES A TALKING GOAT. Do we really need to explain any further than that? I’m sorry, but once you realize that the commercial centers around a goat that drinks soda and goes crazy, shouldn’t that be a clue?

If the fact that it is a Mountain Dew commercial didn’t tip you off not to take it seriously, the goat should have. Once you introduce livestock into the mix, you’re done trying to say anything serious. (I’m aware of George Orwell’s Animal Farm and the like, but it’s safe to say that Orwell would be above writing soda commercials if he were still with us).

The fact that the black rappers are there in the lineup doesn’t make it racist. The goat is brown in appearance like the rappers, but he is a goat and they are human beings, and the absurdity of the lineup is humorous. Maybe the black director was criticizing our country’s criminal justice system. Perhaps he was presenting a piece of racial realism and calling the corporate world’s bluff on it. But I’m willing to bet he was just trying to make a ridiculous commercial.

And maybe it’s not that funny; maybe it’s pretty dumb like just about every commercial on television. I have yet to sit through a Mountain Dew commercial that I found erudite, awe-inspiring or even tasteful. That’s OK though, Mountain Dew drinkers aren’t known for their good taste.

And someone please tell me that animal rights activists have complained that a goat was made to drink a large sugary beverage.

The entire “controversy” is most likely a work like New Coke: something that wasn’t meant to even be a real commercial but put out there just to generate press. It worked: I just spent 25 minutes trying to watch an admittedly asinine Mountain Dew commercial.

One response to “Dew the Manufactured Controversy”