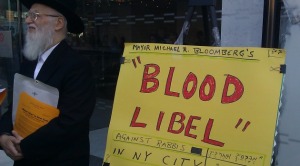 There’s a little-known and thankfully infrequent practice called metzitzah b’peh where a mohel (rabbi who performs circumcisions) briefly sucks the wound of a freshly-circumcised baby’s penis. The stated purpose is to clean the wound of blood.

In addition to the fact that parents voluntarily are letting someone suck off their newborn infant, a rabbi managed to kill two babies by infecting them with herpes in this manner. After this happened, some city officials wanted to ban the practice. It couldn’t be too tough to outlaw performing oral sex on an infant, right? One would think that would already be covered by laws against sex with children and such. But some Jewish groups complained and instead of giving these baby-blowing rabbis a one-way ticket to the big house, the city’s board of health requires that parents of the infant receive notice of potential health hazards and give written permission.

The matter has recently come up as a question to mayoral candidates, with only City Council speaker Christine Quinn defending the Board of Health rule, though with some pandering blather about a “lack of engagement” with people who defend this practice.

So there’s a religious ritual that allows a member of the clergy to perform oral sex on a newborn infant and the political class is debating whether or not to force parents to fill out a permission slip?

And keep in mind, this is only done by a very small minority of a very small minority. Most Jews are not members of the black hat squad, and this is very rare even for them. It is a miniscule population of religious fanatics that do this, what are the electoral benefits of turning a blind eye to a pedophile ritual that has actually killed babies through disease? Apparently the candidates for mayor think that the well-organized Hasidim can deliver enough votes to make it worth their while to play ball.

Religious freedom is one of the founding principles of the U.S., but that’s no cover to commit horrible crimes. The people who brought down the twin towers were earnestly following their heartfelt religious edicts. Could I sacrifice a chicken at my desk at work if I started to practice Santeria? I’m sure if researched the pagan rituals of the ancient Celts, I could find a religious excuse to paint myself blue and fornicate with 24-year-old nubiles. It would be a beautiful celebration of my Irish heritage, I’m sure, but that wouldn’t get me very far in divorce court.

New York is home to every minority you can dream of, and you can covert to whatever religion you want to. Let’s at least draw the line at sucking babies’ penises.