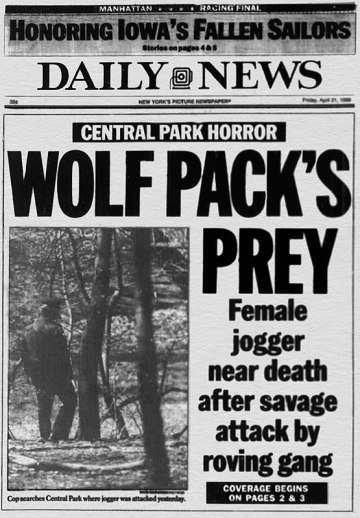 This past week, New York City’s Comptroller approved a settlement reportedly totaling $41 million to members of the “Central Park Five.”

The five men were convicted in 1990 of the brutal rape and bludgeoning of a woman jogging in Central Park in April of 1989. No one who was living in New York at the time could ever forget it. The jogger was so badly beaten that a friend had to identify her by a ring she was wearing on her finger. There was no telling how many people took part in the assault. The five who were convicted were part of a mob that numbered in the dozens.

Because several of the accused were juveniles, there was no way they would serve enough time in jail. They were somehow acquitted of attempted murder. They were convicted of several crimes committed that night, including the rape and assaults on other people in the park, and were sent to prison.

Years later, a serial rapist named Matias Reyes claimed that he had attacked the jogger that night and had acted alone. DNA evidence showed him to be guilty. The Manhattan District Attorney asked that the convictions of the Central Park Five be vacated as a result.

Here’s the first big problem with the confession of the alleged lone rapist Reyes: his tale of being the only attacker goes against the medical evidence that indicates the Central Park Jogger was attacked by multiple people. Part of this evidence includes bruising on both legs of the victim indicating she was held down by more than one person and cuts from a blade (Reyes said he only hit her with a rock and tree branch).

After the verdicts were vacated, the New York City Police Department published a detailed examination of the case, the Armstrong Report, which details evidence beyond the confessions that indicate that the defendants were involved in the assault. This includes statements some of the defendants made to police outside of the interrogation, things they said to family members, and details of the crime some of them provided that were not known to police at the time (for example, the NYPD did not know what property had been taken from the victim but two of the five separately described her Walkman being stolen).

The five sued the City and were helped along by filmmaker Ken Burns, who declared them “exonerated” despite the significant evidence of their guilt and made the documentary “The Central Park Five.”

The Burns documentary is an interesting examination of the case, but it is very one-sided and contains glaring omissions.

Fans of the Burns film are buying into a narrative that lets them feel righteous indignation at a supposed injustice, but the evidence in the case does not gel with the idea the Central Park Five are victims of injustice at all.

The documentary presents its case without any of the skepticism required. It assumes that self-proclaimed lone rapist Matias Reyes is some kind of born-again angel for confessing to a crime (after the statute of limitations had expired, by the way), even though his story is full of holes.

Part of the reason that there is a belief in the innocence of the Central Park Five is what is known as the “CSI effect.” People believe that there is always going to be a mountain of DNA evidence with every case, though there often isn’t. Keep in mind also that the use of DNA collection and examination was in its early stages in 1989. Yes, DNA evidence proves Matias Reyes raped the Central Park Jogger; the evidence shows he was not alone in doing so.

But the public wants to buy into the popular story. Earnest and well-meaning New Yorkers are smitten with Ken Burns’ films and want to believe that the violent men about to become millionaires deserve it and are getting some measure of justice. They are very wrong.