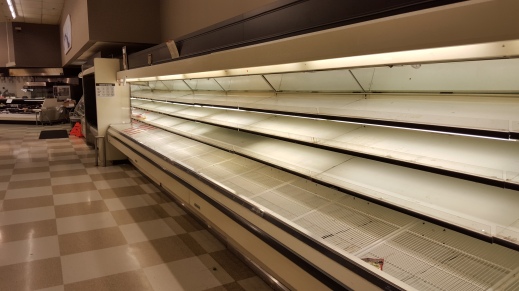 When a local supermarket closes down, people scatter like ants seeking safety. Our area of Queens is seeing two stores close down over the next few weeks. It will be interesting to see where shoppers will go before these stores are reopened.

The scene in the Waldbaum’s on 20th Avenue in College Point, Queens was a sad one. More than half the shelves were empty. Where abundant displays of vegetables once stood were now vacant. Everything was on sale. Products in the aisles were consolidated onto a few shelves. As I was checking out, a woman asked if she could have my shopping basket when I was done; she couldn’t find another one anywhere.

Local supermarkets throughout Queens are being sold or closed after the A&P, which owned several supermarket chains, declared bankruptcy earlier this year. The local ones near where I live are supposed to be reopening. The Waldbaum’s will reportedly reopen as a Shoprite later this year. The Pathmark near our home is supposed to reopen as a Stop & Shop. Both are closing down in the meantime leaving people wondering where they are going to shop.

Food shopping, like much else in New York City, is a generally ethnically segregated affair. There was a Key Food in the shopping center right behind our home. It closed and is now Good Fortune, a grocery store that mainly caters to Chinese shoppers. All the announcements on the PA are in Chinese and many of the people who work there speak no English. Some of our neighbors refuse to go but it’s not a bad store. If you’re looking for fresh fish they have a lot of it, and they even kept a real deli, but if it’s too early in the day and the deli person isn’t there, none of the multitude of Chinese workers will help you other than to tell you in the best broken English they can that you are shit out of luck.

One thing I noticed when I first visited Good Fortune is that there is no cash register #4. The cash registers skip from register #3 to register #5. The Chinese believe that #4 is bad luck. The word for the number four is similar to the word for death in Chinese, so Chinese will go through great lengths not to have the number four in their addresses or phone numbers. Similarly in western cultures there is often no 13th floor of an office building because of bad luck associated with that number.

A few blocks down the street is the H-Mart, a Korean grocery store. It’s smaller and does not have a wide selection, though on Fridays you can go through there and practically eat an entire lunch’s worth of food in the form of free samples. This supermarket also has odd sections of electronics and other things you don’t normally find in a grocery store; maybe that’s a Korean thing. Their selection of non-Asian foods is pretty dismal and we rarely go there. A few years ago supermarket union workers protested outside of this store asking people to boycott it because it had no black or white employees. I haven’t seen these protesters in a while. I don’t normally go to this store but I’ve never seen a black or white employee there to this day.

So some people are not going to shop at the Asian supermarkets and they’ll soon get the chance to shop at their old stores, renovated and under new management. Some have taken to shopping at some of the smaller stores in Whitestone and some will shop at the nearby Target.

New York’s ethnic cauldron will continue to boil and churn. Luckily I don’t mind shopping among the Chinese and will stay well fed.