The essential conundrum of Times Square 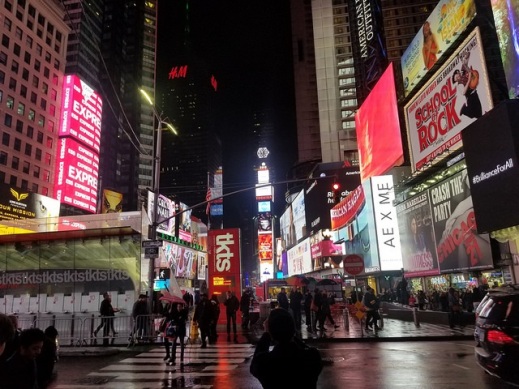 News came out this past week that the company I work for will be moving all of its New York offices to Times Square, where we already have a flashy facility. It will be a big to-do with renovation and creating an office of the future and I’m sure the office will live up to the hype and it will be great for the company.

There’s everything to love about it but it means having to work in Times Square, which is both a blessing and a curse.

Times Square has undergone a complete 180-degree transformation over the last two decades. In the mid-1990s, it was still famous for its crime and pornography. I remember walking through as a kid and marveling at the graphic photos advertising the pornographic films, the barely-censored photos of naked women you tried to look at while pretending to ignore.

Times Square today is a tourist mecca that glows with the false light of a thousand larger-than-life screens and signs. It is a backdrop to television shows, a center showpiece of a city that crawled its way out of the financial and social gutter to become a well-regarded metropolis of the future. It’s found a way to personify the state of the five boroughs within its blocks. When New York was in a state of decay, Times Square reflected that. Now that economic interests have invested for the future here, Times Square reflects that also. Whether you love it or hate it, it is our city’s barometer.

Like much of the conversation today surrounding questions of the changing character of New York City, the gritty past tends to get sugar-coated. While I prefer watching pornography to shopping for Disney trinkets, the Times Square of today is no doubt better for New York City and a proud measure of our progress over crime. (Keep in mind that the tremendous makeover never completely washes out the criminal element or the sub-strata of sleaze or grit. There are still plenty of con artists, prostitutes and drug dealers making money in the Times Square area.)

Times Square’s success as an attraction for visitors makes it less appealing for local residents. Slow-moving foot traffic is maddening for someone trying to get to work. Long lines of people at overpriced tourist traps do not make for suitable lunch spots. Friends who have worked in Times Square report that some of the potential upsides, such as going to the office to watch the ball drop on New Year’s Eve, are foiled by strict rules, often dictated by security concerns.

But as with the rest of life, working in Times Square will be an opportunity to adapt and overcome. I’ll find the good lunch spots to go to and I’ll figure out how to move in and out without being caught up in mobs of plodding tourists. Being a New Yorker means being able to find the right path through adversity and make inconvenience into something triumphant.

The midtown canyons of concrete and glass will be calling for me within a year’s time. It will be another chance to embrace the chaos of living in New York, and make a new path to life in the city.