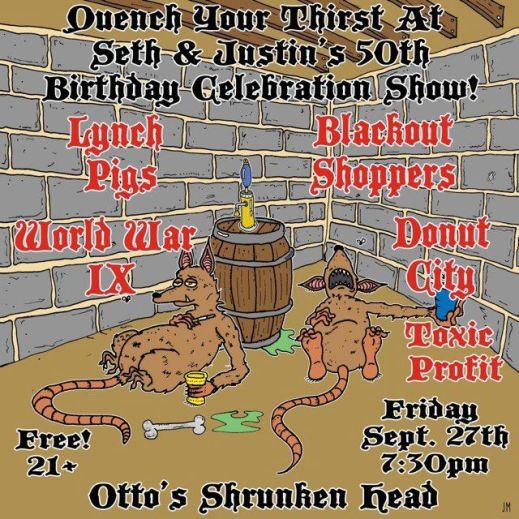 Capturing the New York punk scene better than anyone since the death of Lester Bangs is The New York Waste, and picking up the Waste is a must. When I first started reading it almost two decades ago, it introduced me to the best punk rock bands on the scene at the time. It featured cool photos of the Lunachicks and the Toilet Boys and the Bullys, awesome mention of The Spunk Lads and others. Paging a little farther, what did I find but ‘Last in Line for the Gang Bang, a comic biography of G.G. Allin.’

For those unaware, G.G. Allin was a punk rock musician infamous for his violent and obscene performances. He may be better known today as his legend has grown with retellings of his stories and the admiration of musicians who have broken into the mainstream. But in the early 2000s, only a select and disturbed few were allied in their admiration of the late self-described “scumfuck.” (Insider’s note: despite his violent habits, G.G. Allin was a gifted songwriter who left a prolific legacy of excellent punk rock and country music before his untimely end at age 36 in 1993.)

So the fact that someone was producing a comic strip serial biography of G.G. Allin bowled me over. That such an awesome artistic endeavor was underway and had an audience getting it free through the New York Waste made me realize I had found a great home in the punk scene of New York. The Big Apple became a little less lonely knowing that there were other sickos out there.

At the same time, I began looking to start my own punk rock band, and was soon working on original songs with, as the luck of the Internet would have it, Bruce Steinert from the band Buzzkill. We needed a singer.

“I’m friends with a guy who our band would play with back in the day in New Jersey. He used to do things like take bloody meat out of his pants and throw it at the audience,” Bruce mentioned at rehearsal, speaking of the New Jersey band Daisycutter.

Soon afterwards, Seth Amphetamines entered the picture and became the singer of what would be Blackout Shoppers. There are not too many people who can command a stage and make the entire venue the center of punk rock chaos in the way that Seth can, and that’s a good thing. It’s an acquired skill to engage with the audience in a mosh pit with great passion without creating lasting hostility or becoming one of the bogus tough-guy copycats that have created so many boring hardcore bands over the last few decades.

Seth is the only singer I’ve seen who has gotten members of the audience angry enough to throw beer cans at him only to have them share beers afterwards. Whatever violence he dishes out is in without hate or malice, and in sincere appreciation of old school hardcore punk.

I went to see World War IX at CB’s basement, which was part of a still-existent CBGBs at the time (where Blackout Shoppers would play its first show in a complete fluke later that year), and introduced myself to Justin. He was glad to meet someone who enjoyed his comic and we vowed to stay in touch.

This month, both Justin and Seth turn 50, and the bands are celebrating with a show together at Otto’s Shrunken Head, one of our favorite places to play. It will be an evening filled with alcohol, music and good times. Please join us.

One response to “Old punks don’t die, they just do more cocaine”