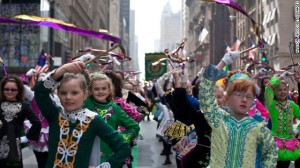 New York City Mayor Bill de Blasio said that he won’t be attending the St. Patrick’s Day Parade because the parade does not let gay organizations march under their own banners.

The statement made the news, though it was not likely de Blasio’s intention to do so. He mentioned it in response to a question at a news conference he had called to announce the appointment of a deputy mayor. But the press likes controversy over cultural issues a lot more than rudimentary announcements of mayoral appointments, so there you have it.

The St. Patrick’s Day Parade does not outlaw gays. There’s no marshal on Fifth Avenue with a Shamrock Gaydar device pulling alleged homosexuals out of the parade. The St. Patrick’s Day Parade is organized by the Ancient Order of Hibernians. The AOH is religiously Catholic and since the Catholic Church, like almost every other major religion, considers homosexual acts sinful, it doesn’t want openly gay groups marching under their own banner.

I agree that the Ancient Order of Hibernians should allow gay Irish groups to march in the parade under their own banner, or at least give them the same consideration they would give to any other Irish group. I’m all for gays, lesbians and any and every other designation under the expanding LGBT nomenclature being treated equally under the law and given full respect and dignity.

But the Hibernians have the right to be as ancient as they like in their attitudes and parade policies. The parade even avoids certain city regulations because the parade predates the American Revolution. I would love to divorce Irish culture from Catholicism and put it on a more secular, nationalist bent. But it’s their parade and they can run it as they choose. Likewise, organizers of the gay pride parade can decide they don’t want Irish or Catholic gays marching under their own banner. That’s their right.

De Blasio is being consistent with his refusal to march in the main parade; he didn’t march as a councilman or as Public Advocate for the same reasons. But this consistency is now a problem. He’s not a councilman or the Public Advocate anymore. The job description changes when you are mayor. Mayors represent the entire city and to get drawn into battles over ethnic parades should be beneath them. Rudolph Giuliani, a Republican mayor who was pro-gay rights and first legalized same-sex unions in the city, marched in every St. Patrick’s Day parade as mayor.

I’m also curious as to how consistently political figures who avoid the mainstream St. Patrick’s Day parade are with their insistence on inclusion. There’s a Muslim Day Parade and other overtly religious parades that may also disapprove of gays. If they don’t have an openly gay group among their marchers, are they verboten also?

Taking the activist left position on everything only paints you into a corner. Though to be fair, there was an effort to convince the Mayor to ban city workers from marching in the St. Patrick’s Day parade in their uniforms and de Blasio didn’t take that left turn to crazyville.

By avoiding the St. Patrick’s Day parade, de Blasio doesn’t stand to change anything but lower his own standing. Lots of New Yorkers, Irish or otherwise, will look at him not as a more liberal-minded manager but as the white David Dinkins, involving himself in a well-tread skirmish in an old and tired battle.