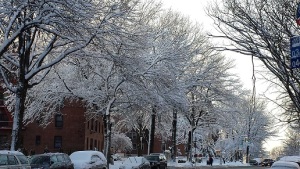 The Winter Olympic Games are taking place in Sochi, Russia at a time when New York (and Atlanta) have more snow. Few would have thought that Russia, known for its cold weather, would be having problems keeping snow on the ground for the winter Olympics. These are strange days.

During the 2010 Olympics I nearly wiped out on the treadmill at the gym while ogling the Danish Women’s Curling Team who were on a nearby television screen. Beyond that I didn’t pay much mind to any Olympics until the Russia vs. U.S.A. game came on this past weekend. It was nice to see a U.S.A. victory of the Russians, though such victories are now without their Cold War benefits.

In New York City, heavy and sustained snowfall with cold temperatures have made the daily grind of life that much more difficult. The New York Times proposed a few new weather-related games. In that same vein, here are five proposed Olympic events specific to New Yorkers during a difficult winter.

Slush Slalom: This season’s snowfall has been heavy and ranks among the city’s worst as far as inches of snow received. What makes this year’s succession of storms so bothersome is that in addition to the quick sequences of snow storms, is that some of them have been accompanied by freezing rain that makes for heavier snow during the day and then ices over at night. It also produces a lot more slush a lot earlier than normal. I like to think I have mastered the nimble ballet of stepping over and around these odious slush puddles. An Olympic event could make use of these New York winter staples by letting competitors race through a slush-filled street like skiers or judging these dances of slush-avoidance as they would a figure skating competition.

Plow Wall Excavation: Snow plows in New York keep the streets clear of snow and generally do a good job. The Sanitation Department definitely does more to keep the business and tourist areas of Manhattan free of snow than it does for the outer boroughs. But wherever they operate, snow plows leave in their wake very heavy, compact walls of snow that are very difficult to shovel. Unfortunate car owners have had to spend significant amounts of time freeing their cars from these cold tombs of dense white. For an Olympic event, have a race where competitors with the same sized shovel have to dig out a car. The first team to free the car and drive it out of the blocked space wins the gold.

Improvised Sledding: There are lots of snow sleds you can buy at a store to ride down a snow-covered hill, but what’s more fun is having to improvise with found objects. Cardboard boxes, plastic fast food trays, garbage-can lids, these are some of the things that would be acceptable in competition. Anyone with a store-bought sled is disqualified. Competitors who could manage to sled acceptably with the more obscure objects would get extra points.

Bus Stop Endurance Wait-athalon: The Metropolitan Transit Authority does a lousy job shoving snow away from bus stops and subway entrances. Subway service is almost always delayed because of bad weather. City bus drivers have to contend with snowy streets and plow-wall blockage of curbs and bus stops. They also tend to run fewer busses and drivers take the liberty of avoiding stops they don’t like and letting passengers wait things out a little longer. Standing at a cold bus stop and waiting and waiting for a late bus is an easy endurance event. The gold medalist is the person who waits the longest for their respective bus without quitting.

Considerate Door Usage: Moving in and out of buildings and small businesses is an art that few have mastered. We need to get in and out quickly and open the door as little as possible to fit yourself through. Temperature gauges could measure how much cold air is let in by the competitors. Like gymnastics, this sport favors smaller competitors.