Being the Sleek Impostor 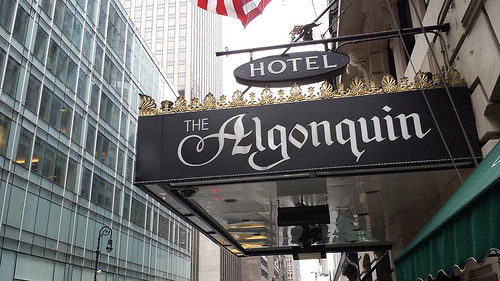 This past Friday I had a work meeting to go to even though I was officially off from work. I had no one to blame but myself. I set up the meeting and I hadn’t realized that our office was closed that day. But it was an important lunch and it fit everyone’s schedule, so it was less of a hassle to see the thing through.

If the event went well it was all good and fine but if it didn’t go well it was trouble at work for me. I put on a suit and tie and rode the subway into Manhattan with nervous apprehension.

I was early in getting to Grand Central Terminal on the 7 train. Whenever I’m at Grand Central Terminal I rarely need to go through the large central hall but I can’t resist doing it. Even when it is crowded with travelers and teeming with tourists, it’s a crime to be so close to such a beautiful room and not go in it. So I walked into the room and took up a spot along an unused portion of counter at an unused ticket window, where soldiers stood at patrol and tourists stood with cameras or huddled over cluttered luggage.

To look at me in my dapper suit, raincoat and hat, one would think that I had some important financial reports or lucrative financial plans in my carrying case. But since I was due to go to a Blackout Shoppers rehearsal after the lunch, my briefcase contained an instrument cable for a guitar (in my case bass guitar) and a tuner. It also had a notebook for poetry.

I fished out my notebook and scribbled a messy draft of a poem, “Impostor” there in the main hall of Grand Central. I felt like I was some secret poetry agent making some kind of illicit blueprint. My outfit screamed that I was a self-important financial person or lawyer but really I was a scatterbrained poet longing for leisure and rest.

But not to let anyone be the wiser, I quickly concluded my sweet soul arson, packed up and moved along.

I got to the Algonquin Hotel early and found our round table waiting for us. I stood waiting in the lobby of the Algonquin, under the watchful eye of s caricature of Dorothy Parker, and met people for the lunch.

The lunch went very well and I sat through it all politely, in some small way hoping no one caught on that I book-ended my lunch meeting with poetry and punk rock. Then again, I had no way of knowing the secret artistic endeavors of all of my lunch mates. No doubt some of them were heading on to sneak in some good works that will ignite great imaginations and destroy the corrupt worlds of succubae. That’s part of the beauty of living in the world and keeping a professional bearing at all appropriate times: you may be daydreaming about sex with supermodels, time traveling or what would happen if you mated Michael Phelps with an orangutan, but everyone around you is having similarly inventive dreams. Count on it.

When Walt Whitman wrote “I contain multitudes,” in his poem “Song of Myself” he was speaking for all of us in a way. We’re all the impostor in one instance or another, we all have different selves that we find most comforting and most appropriate at different times.

The trick is not to hate any one element of yourself but to embrace them all. Be that guy at the fancy lunch and act like you belong there. Play that ruckus music until you make someone’s ears bleed. Live you live by the spitfire lines of mad, mad poetry, cavort with all manner of hearty souls and don’t look back.

In New York, no one is really any more of an impostor than anyone else.

3 responses to “Being the Sleek Impostor”