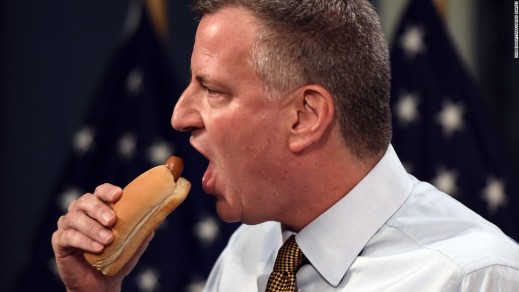 It is frustrating to see gifted people throw away opportunities and waste their talents, and that’s the impression I get when I read about New York City’s current mayor, Bill de Blasio. Mayor de Blasio set out to be a more liberal Fiorello LaGuardia but may go down in history as the white David Dinkins.

The problem isn’t that New York City voters aren’t liberal, it’s that New York City is comfortable enough with its liberal political leanings that the large cultural issues that consume debate in the other parts of the country have long ago been settled here. Gay civil unions in the city started more than 20 years ago. In New York even the Republicans are all pro-choice. New York City’s gun laws are among the strictest in the nation (unconstitutionally so in my opinion).

So a liberal Democratic mayor who has big ambitions to make waves on social issues is largely going to be preaching to the converted and, more importantly, not focusing on actually running New York City.

Running the city takes the full attention of City Hall. New York City has a larger population than some states. The New York City Police Department is larger than some nations’ standing armies. There is a large public transit system that is at the mercy of the State of New York government, an enormous educational system and a multitude of public services and complexities that need constant management and planning.

When a mayor becomes enamored with causes beyond the very real world applications of running New York, they quickly lose their bearings and earn the city’s scorn. This is what has happened with Mayor de Blasio. While he was swept into office with high hopes and a lot of progressive promises, his attempts to be an activist mayor have left the city in need of a no-nonsense manager again.

Our more recent past mayors fell into this same trap. Rudolph Giuliani squandered his political capital on trying to position himself to run for higher office. Michael Bloomberg went off the rails trying to police our diets.

Mayor de Blasio seems to have done himself in on several fronts, but most importantly is that he appears willing to undo the work that Rudolph Giuliani did in cleaning up crime in New York. He voiced support with those protesting the police and let protesters shut down parts of the city. His treatment of the police has been so shoddy that cops turned their back on him en masse when officers were killed in Brooklyn by a #BlackLivesMatter-inspired madman.

This perception doesn’t entirely match reality. The crime statistics don’t say that New York is sliding into the crime-ridden morass of three or four decades ago. But de Blasio had already painted himself into a corner. He aligned himself early with activists who see racial bias in everything the police do; he doesn’t have the luxury of speaking truth to the activists who helped elect him. Not content to simply stop traffic in protesting the police, the #BlackLivesMatter movement started targeting diners in restaurants that they deemed “white spaces” in BlackBrunchNYC protests.

As a parent of girls whom I expect to enter the New York City public schools, de Blasio’s efforts to degrade the standards on gifted programs and elite high schools terrify me. The best defense for my girls’ future will happen in 2017 when we get a chance to make Bill de Blasio a one-term mayor.