Brown Bin Follies, and Why Composting is Not Just for Hippies Anymore 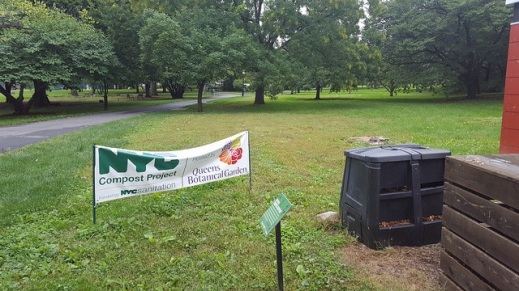 One of the odors that comprises the urban bouquet is that of garbage. The smell can be ubiquitous and is unmistakable, and the air of the hot summer months amplifies the oppressive stench when it sits uncollected for too long.

New York City has had recycling laws on the books for some time now, and while the success of the city’s recycling program is mixed—plenty of trash goes in recycling still, and the most ardent recyclers are homeless people who collect aluminum cans for the deposit money—recycling has wound its way into the everyday bustle of city life. It’s accepted as part of our routine.

The new frontier in responsible trash processing today is in composting: separating out the organic matter that can be used to create rich soil and put back into agricultural use. To this end the New York Department of Sanitation began a program that collects food scraps and yard waste to both promote composing and to help cut down on rats and roaches. The more edible food that’s in the garbage, the more vermin there will be to feast upon it.

But recently the Department of Sanitation halted the expansion of the program, saying it would focus on increasing adoption in those areas that were already in the program before expanding it. I can see why they did this. One could easily confuse these smaller brown bins for medical waste receptacles or for regular small garbage cans. No doubt people are adding their own manner of organic matter to these bins and probably making a mess of it.

Whatever the merits of the city’s program, you don’t need the Department of Sanitation to begin composting on your own. You can do it yourself and there are several organizations that will help you do it.

Among the enthusiastic composters in the city is my wife, who grew up in Eastern Queens and her family had a house with a yard when she was a youngster, and her family had a composting pile in their garden. She is one of the leaders of our local community supported agriculture program, Flushing C.S.A., and brings compost to a drop-off location at Queens Botanical Garden.

I was very skeptical of my wife’s plan to keep rotting food in our kitchen on purpose, but the composing has worked out so far and is easier to do than you might think. You can buy an inexpensive (about $20) countertop composting bin with charcoal filters to contain the odors. And the odor doesn’t get that bad, it actually smells like someone is trying to make pruno in your kitchen for a few seconds after you open and close the bin.

We have healthy jalapeno plants growing on our windowsill in containers filled with compost we got back from Queens Botanical Garden. Our basil plans, which make half our kitchen smell like a fancy Italian restaurant, are also growing in soil that is partly compost.

Why is this kind of thing important? Because we are running out of places to dump our garbage, with China recently refusing to handle more trash and recycling from other parts of the world. New York City ships much of its garbage out of state, but that is getting more expensive and it’s only a matter of time until that becomes unfeasible.

This kind of thing is smart to do. It’s for survival and the fittest people that are going to survive are the ones who can do more with less and organize to consume resources in a reasonable and sustainable way.

It would be easy to brush off composting as tree-hugging hippie nonsense, but it is not. Hippies are slackers who only want the trappings of conservation so they can feel good about themselves. Real conservationists and survivors are willing to do the hard work and build real systems to have the confidence in their future.

So embrace the rot and death of life to cut down on the rats and roaches and add more nutritious soil to our land. It is the smart thing to do.