Fatherly adventures of being your children’s +1 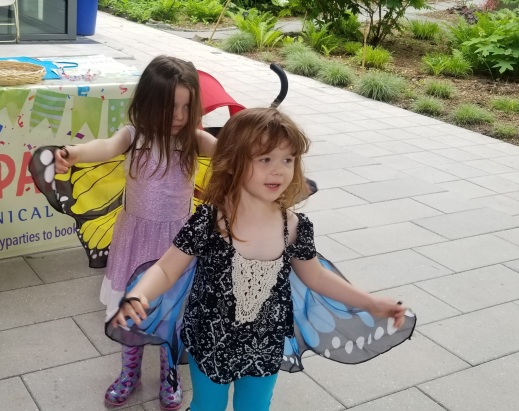 This past weekend I had several hours alone with my three children. Normally we have full family outings on the weekend but it helps keep our family healthy if my wife gets a break from being around children for at least a few hours each week.

There was a Twist & Sprout festival at the Queens Botanical Garden and I decided this would be a good place to take our three daughters. We had been there last year and it was a good time with plenty to offer the kids.

After getting my girls out of the van and dropping off some compost, we set off to explore the festival. Arriving at the Queens Botanical Garden with my daughters is like being a celebrity’s date at an award’s ceremony. Because they are there at least twice a week for the Forest Explorers program, my girls know a lot of the people who work there. One of the teachers at the program recently graduated college and gave my girls big hugs. Other employees waved hello to us from their zooming golf carts or from arts & crafts tables.

There was a puppet show and the puppeteer was the mother of another one of the students at the Forest Explorers program. Other parents stopped to chat with me; they recognized my daughters and asked where my wife was. It was all very friendly, but I was definitely a stranger among them. I was appreciated for bringing my girls there. No doubt they are the better life of the party.

While I pride myself on being a good Dad, the point was driven home that for most hours in the week, I am largely absent from my daughters’ lives. I am out the door to catch a 6:30 a.m. bus in the morning and with afternoon rush-hour traffic I am usually not home before 7 p.m. It is dinner time soon after I arrive home and time for bed soon after that. The weekends are when I try to catch up and cram a lot of living into two days before the cycle starts up again, at least on most weekends (sometimes I have to work on the weekends).

Since 2014 I have been my children’s +1. In theory I could show up at a family gathering without them, but I’d face an extremely disappointed crowd. There’s no substitute for adorable young children.

Case in point: my reception at the Queens Botanical Garden was warm and embracing, which would not have been the case if I had shown up on my own. No one would have treated me poorly, but no one would have known who I was or given me a second glance. When fantastic little girls are your posse, you are a 100% winner wherever you go.

Our children are better versions of ourselves, bright and new to the world with endless possibilities in front of them. When we’re well received based on being with them, it reflects their position in the world and how they’re being raised.

2 responses to “Fatherly adventures of being your children’s +1”